I have already spoken about independent reading in a comprehensible input (CI) classroom. As I mentioned in this post, when language learners read in the target language (TL) at a level that is comprehensible, they are providing themselves with comprehensible input and are thus acquiring language. I can’t tell you how many times I have had students tell me that they knew what a certain word meant because they saw it in a book they had read.

Many other CI teachers do novels in their classes. Some teachers carve out a few weeks (anywhere from three to six depending on the novel and class level) to do an entire novel, but I had better luck doing a chapter every three to four weeks. This year I did the novel Brandon Brown Veut un Chien with my French 1 class and the book Los Ojos de Carmen with my Spanish 4 Honors class. In previous years I have also done Pauvre Anne and Vida o Muerte en el Cuzco. My approach to doing a whole class novel depends on the level of the class, which I will talk about a little in the next few chapters.

In my French 1 class, we started Brandon Brown Veut un Chien in January and finished it in June (I should note that this book also comes with a Teacher’s Guide, which I did not purchase due to lack of funds. But even without the Teacher’s Guide I managed to carve out a successful procedure for reading this book). For the beginning chapters, I chose a few words to pre-teach per chapter and then we read the chapter together aloud using choral translation. Sometimes we had “Talk Like a Pirate Day” and the students would translate using funny voices. Sometimes we would have “Battle of the Sexes” and we would have the males and females take turns translating and I would award points to the groups based on translation accuracy. I tried to make choral translation as novel as possible so my students would not get tired of the activity. I also never did choral translation for longer than 15 minutes per class (and even that was pushing it).

Once we finished the chapter, we reviewed using a variety of different activities, most of which I took from Keith Toda’s awesome blog. Then students had a short quiz and created a Smashdoodle of each chapter as a culminating activity, which is a project that is sort of like a scrapbook page (If you would like more information on doing Smashdoodles with your students, read this post). Here is an example of a Smashdoodle made by one of my students. 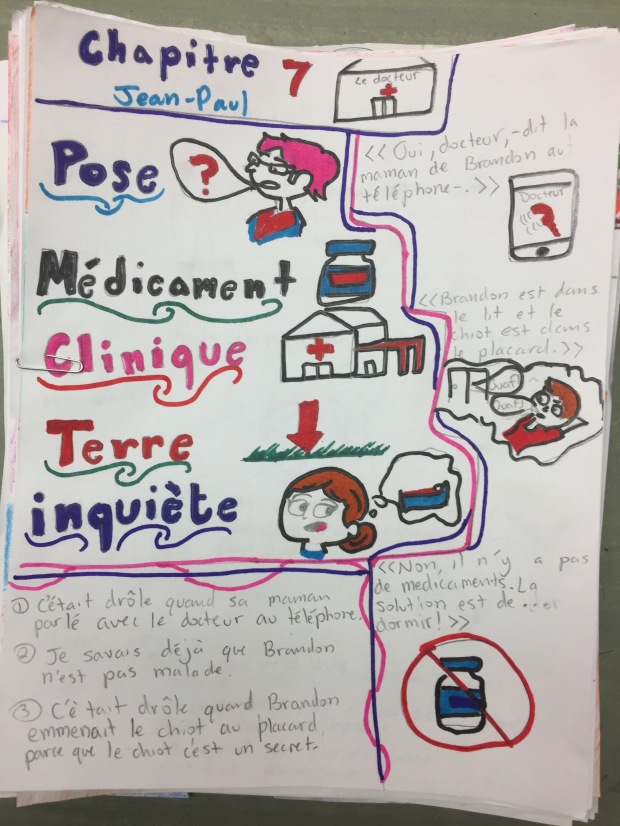 As the year went on, we continued with the same procedure but translated much more quickly. While at the beginning of the year it took a whole week (15 minutes per class, 4 classes per week) to get through a chapter, soon it was only taking us half that.

When we got to the later chapters we would start the chapter in class and students would finish it independently at home. Then they would take a short quiz to show that they had actually read it and we would review the answers (Due to the language level of my students, the quiz was in English). By the end of the year students read much more quickly with much more fluency, and due to the repetition of vocabulary words in the text they had acquired a sizable vocabulary of high frequency words.

In my Spanish 4 Honors class we read Los Ojos de Carmen. Since this was an advanced level class, I did not do choral translation with them but required them to read each chapter independently and come to class prepared to take a short quiz on it. When they finished the quiz, we reviewed the answers in the TL. I underlined the answer to each question in the chapter that I projected for the students to see, and THAT we would translate chorally. This story took place in Ecuador, and the culture lent itself to exploration of Ecuadorian food, music, history, and other themes, which I had a lot of fun exploring with my students.

This particular class had traditional teachers for all three previous Spanish classes, so I went slowly with them at first. For the first few chapters, I let the students read together with partners in class and finish at home on their own. As they started feeling more comfortable with independent reading, they started reading the whole chapter on their own, sometimes beginning in class but mostly at home. As time went on, the amount of time I gave them to complete their reading decreased. At first I gave them an entire week to read a chapter, but by the end of the year I only gave them two nights. This class also did a Smashdoodle for each chapter, although the language was more advanced. Here is an example of one of the Smashdoodle made by a Spanish 4 student. 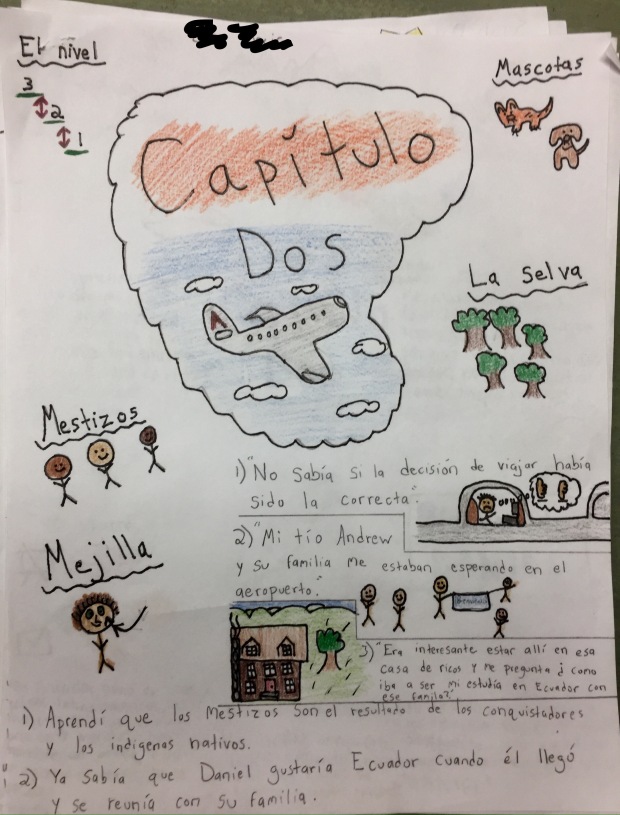 Besides being a great was to deliver comprehensible input, one of the unexpected advantages of reading a class novel was more practical. Having students read a chapter was a simple, easy lesson plan for days when I was absent from class or only had half a class due to Advanced Placement testing or field trips.

Many other CI teachers have blogged about doing novels in class. Martina Bex has this great post about doing a class novel, in which she talks about her favorite novels, funding for class novels, and how she teaches novels as stand alone units.

I only have two days left of school before summer vacation, and am already thinking about what novels I will be doing next year. It looks as if I’ll be doing a lot of reading this summer!

One thought on “Reading Novels in a Comprehensible Input Classroom”